Less Than Monster, More Than Man! (Table of Contents) 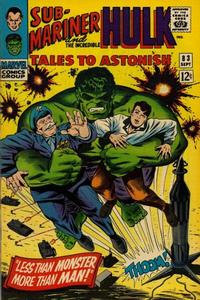 The Sub-Mariner Strikes! (Table of Contents: 1)

Capricious Commentaries, Carefully Cooked-Up to Confuse and Confound You! (Table of Contents: 2) (Expand) /

Less than Monster, More than Man! (Table of Contents: 3)

First Line of Dialogue or Text
Captured by the astounding power of Boomerang, Betty Ross is rescued from him by the...
Genre
superhero
Characters
Hulk [Bruce Banner]; Thunderbolt Ross; Glenn Talbot; Betty Ross; Rick Jones; Boomerang [Fred Myers] (villain); Secret Empire (villains)
Synopsis
The Hulk has saved Betty from the Boomerang but Ross thinks he has kidnapped his daughter so he sends the whole force of gamma base after the jade giant. While the miltary is distracted with their Hulk hunt, Boomerang tries once again to capture the Orion missile.
Reprints
Keywords
Orion missile

First Line of Dialogue or Text
Dear Stan, When I first looked at the last panel in the Hulk story in Astonish #79, I laughed.
Characters
Thing [Ben Grimm]
Reprints