Where Gods May Fear to Tread! (Table of Contents) 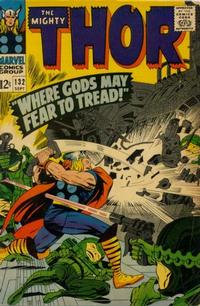 Rigel "Where Gods May Fear to Tread!" (Table of Contents: 1)

First Line of Dialogue or Text
I have over-powered the two alien creatures within this ship… but now we approach their home world… the mysterious Rigel!
Feature Logo

The Dark Horse of Death! (Table of Contents: 3)

First Line of Dialogue or Text
Now that we have defeated the hordes of Harokin, it is time for us to rest, warriors of Asgard!
Genre
fantasy-supernatural
Characters
Thor; Warriors Three [Volstagg; Hogun; Fandral]; Harokin; Black Stallion of Doom (introduction)
Synopsis
Thor and companions rest after defeating Harokin's Hordes. Harokin, mortally wounded, waits for the Black Stallion of Doom.
Reprints