Main cover image is from the cover of The Flash (DC, 2011 series) #14, inset images by various artists taken from stories in this issue. 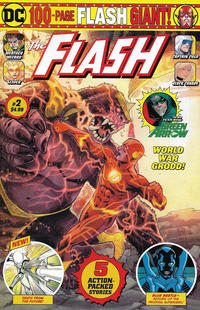 Eobard Thawne is shown holding a copy of The Flash Giant (DC, 2019 series, first series) #1, one of the "documents" from where he learned of the existence of The Flash.

First Line of Dialogue or Text
Now that Barry Allen's CSI work is done...
Genre
superhero
Characters
The Flash [Barry Allen]; Trickster [Axel Walker]; Green Lantern [Hal Jordan] (image)
Synopsis
Barry is bewildered when the laws of science are seemingly contradicted as he encounters talking animals and he discovers that the Earth is flat.

The End (Table of Contents: 4)