Year of the Villain - Hostile Takeover tie-in
This issue has variants:

Year of the Villain (Table of Contents)

Acetate outer cover over inner cover. Outer image shows The Batman Who Laughs and his Dark Robins, under the acetate shows Batman and Superman as his captives.

Issue credits cover to David Marquez and Alejandro Sanchez, but the cover is signed by Lupacchino and Lokus. 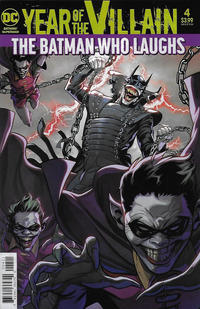 Who Are the Secret Six? Part Four (Table of Contents: 1)

Genre
superhero
Characters
Batman [Bruce Wayne]; Superman [Clark Kent; Kal-El]; The Batman Who Laughs; Scarab [Blue Beetle; Jaime Reyes]; Commissioner James Gordon; Deathbringer [Donna Troy]; Sky Tyrant (Earth 3 version of Hawkman); Supergirl [Kara Zor-El]; King Shazam [Billy Batson; The Shazam Who Laughs]
Synopsis
Batman and Superman battle Scarab, formerly Blue Beetle Jaime Reyes who has been infected by The Batman Who Laughs. He is soon joined by other infected heroes, Donna Troy, Hawkman, and Commissioner Gordon, who keep the heroes busy so that The Batman Who Laughs can bring a satellite from the Dark Multiverse that he can use as a weapon to infect everyone on Earth.
Reprints
Keywords
Bermuda Triangle; Dark Multiverse; Dark Nights Metal; Fortress of Solitude; The Infected