Many background pencils and inks by Martin Thall.

Actors on the cover do not appear to be either known set of actors to play Captain Video and the Video Ranger. In the 1951 Columbia serial shown in theaters, they were played by Judd Holdren and Larry Stewart. In the DuMont network TV series of 1949-1955, they were played by Don Hastings and Al Hodge. 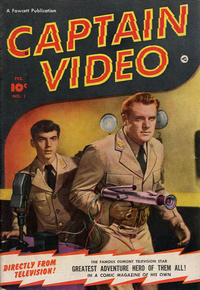 Features a photo of Al Hodge as Captain Video

The Secret of Sun City (Table of Contents: 2)

The Creatures of Doom (Table of Contents: 6)

Color photo of Al Hodge and Don Hastings in costume. On back cover.