The Time When Men Could Not Walk! (Table of Contents) 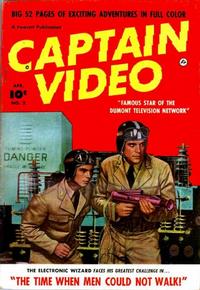 The Time When Men Could Not Walk (Table of Contents: 2)

The Gun Duel (Table of Contents: 3)

Boyd Meagher credits Weisbecker on most of the Captain Video stories and the credited artwork on Bob Swift Boy Sportsman #1 (Fawcett) is identical to this one. Square faces with heavy chin, straight smiling mouth and often pin point eyes almost like Al Micale. And everybody so alike they could be related.

The Hidden Island (Table of Contents: 4)

The Little Monsters (Table of Contents: 6)

The Legion of Evil (Table of Contents: 7)

Text message from Captain Video to his fans.