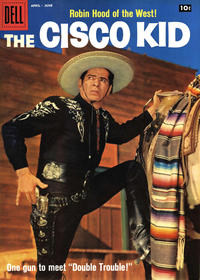 Collage consisting of two photos of the Cisco Kid and a drawing (artist unknown) of Pancho.

First Line of Dialogue or Text
Why are you so gloomy, chicos?
Genre
western-frontier
Characters
Cisco Kid; Pancho; Big Ben (blacksmith)
Synopsis
Cisco makes an enemy when he forces the town blacksmith to pay children what he had promised them for cleaning his shop. After a gorilla makes a brief escape from a carnival, the blacksmith gets a gorilla suit to lure Cisco into an ambush.
Keywords
bank robbery; blacksmith; carnival; disguise; gorilla

First Line of Dialogue or Text
Hope I earn a few pesos so I can afford a soft place to sleep!
Genre
western-frontier
Characters
Pedro
Synopsis
Pedro invents a mechanical horse to teach riding, but it is too rough for beginners.
Keywords
invention; mechanical horse; millionaire; robbery

Pencils and inks credits from French fan magazine Back Up #14 submitted by Stephane Petit, via the GCD Error List (11 March 2009).
Title added from the John Buscema checklist by Jim Vadeboncoeur, Jr. and Michel Maillot.

First Line of Dialogue or Text
Brady, do you ever think of what you aim to do first when you get out?
Genre
western-frontier
Characters
Cisco Kid; Pancho; Brady
Synopsis
Brady escapes from prison and hires an actor, who needs money to pay gambling debts, to impersonate the Cisco Kid and rob a stagecoach.
Keywords
actor; cat; disguise; escape; gambling; Hamlet; impersonator; play; prison; rifle; ring; stagecoach

Statement of Ownership for October 1, 1957. No circulation figures given.