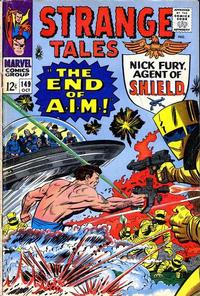 Genre
spy; superhero
Characters
Nick Fury; A.I.M. (division of "THEM", really HYDRA); Dum Dum Dugan; Jasper Sitwell; Count Bornag Royale (A.I.M.); Number Nine (The Secret Empire) [Gabe Jones]
Synopsis
A.I.M. agents steal an LMD which turns out to be the real Nick Fury. The Heli-Carrier is on high-alert after Fury's leap and Sitwell plants a tracer on Count Royale as he rushes out. A pair of fleeing A.I.M. agents are met by one of the Secret Empire, which is a branch of "THEM"! The A.I.M. men are gassed unconscious by Gabe Jones working undercover. Jasper trails Royale to A.I.M.'s hidden base just before it explodes. Fury visits SHIELD's Museum for clues on HYDRA and is almost killed by an energy ray. Fury realizes "THEM" and HYDRA are one and the same, and it's up to SHIELD to stop them.
Reprints

Part 5 of 5. Secret Empire storyline continues from Hulk story in TALES TO ASTONISH #83; then concludes in Sub-Mariner stories in TALES TO ASTONISH #83-85 (September-November 1966). "THEM" is revealed to be a cover-name for HYDRA; as they supplied The Fixer who appeared in STRANGE TALES #141-143 (February-April 1966), this means HYDRA has never really gone away at this point! It's revealed that Count Royale was not killed in the massive explosion, in the Captain America story in this month's TALES OF SUSPENSE #82 (October 1966), as Cap winds up facing one of A.I.M.'s artificial androids.

If Kaluu Should Triumph... (Table of Contents: 4)

Genre
superhero; fantasy-supernatural
Characters
Dr. Strange; The Ancient One; Kaluu; Demons Of Danak
Synopsis
After 500 years of exile in the Nameless Dimension Kaluu returns to destroy his former friend, The Ancient One. Sealing Strange's sanctum in an impenetrable barrier which not even Strange's ectoplasmic form can pass he summons the Demons Of Danak, other-dimensional monsters, to attack. Knowing they cannot be stopped while in contact with their master, Strange & his mentor wait until the creatures penetrate the barrier. Finally striking out in a destructive force of energy, Kaluu enters the house, only to find his foes have vanished among the wreckage.
Reprints