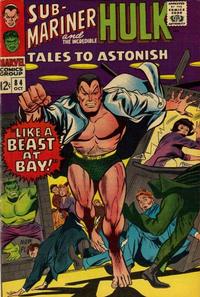 First Line of Dialogue or Text
Note: This sugar-coated synopsis is written more for our benefit than yours...
Genre
superhero
Characters
Sub-Mariner [Namor]; Lady Dorma; Secret Empire (villains); Krang (villain); Hulk [Bruce Banner] (cameo, on a newsreel); Harry
Synopsis
Namor has lost his memory and the leader of the Secret Empire convinces him to track down and kill the Hulk. As Namor rushes around New York looking for the jade giant, he is zapped by a ray from Krang which only succeeds in restoring his memory.
Reprints
Keywords
amnesia

Crossover with The Incredible Hulk story in this issue.

Rampage in the City! (Table of Contents: 3)

First Line of Dialogue or Text
The Hulk is thru with hiding--thru with running!
Genre
superhero
Characters
Hulk [Bruce Banner]; Thunderbolt Ross; Glenn Talbot; Betty Ross; Rick Jones; Boomerang [Fred Myers] (villain); Gorki (villain, unnamed); Sub-Mariner [Namor] (cameo); Dan
Synopsis
Finding gamma base deserted and everybody gone, the Hulk heads to New York City to try and find his old friends in the Avengers but finds himself attacked once again by city police. Rick, hearing that the Hulk is in the Big Apple, gets a job driving a car to New York for a mysterious stranger who tells him to be sure not to look in the trunk.
Reprints
Keywords
subway

Jerry Grandenetti pencil credit added by Mark Evanier (via the GCD Errors list, August 2009), who credits him with about half of the story.

Nick Caputo adds that Bill Everett may have penciled and inked most of the first two pages, with Grandenetti doing the rest (over Kirby layouts?) with the Hulk and Rick Jones apparently inked by Everett throughout the story to maintain consistency. Other inkers likely include Mike Esposito, Sol Brodsky and John Tartaglione. Panels 1-2 on page 5 are reproduced from Sub-Mariner story.

First Line of Dialogue or Text
Dear Stan, Dear Mr. Hulk - we would like to congratulate you on your colorful career, and we...
Characters
Sub-Mariner [Namor]; Thing [Ben Grimm]
Reprints