Tales of the Invisible (Table of Contents) 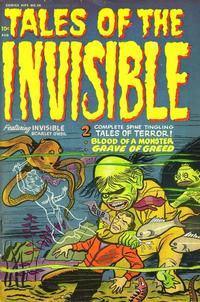 A background of the artist. Includes a photograph of Stamm and an illustration by him of his characters. Presented on inside front cover in black in white, with indicia at bottom.

Genre
detective-mystery; adventure; superhero
Characters
Scarlet O'Neil; Professor Fychfud (introduction); Sandy; the Fiend (villain; introduction)
Synopsis
Scarlet runs into one of her teachers from school, Professor Fychfud, who now runs the Aquarium. He takes Scarlet on a tour. When they get to the piranha tank, Scarlet sees human remains, and then finds herself pushed into the tank. She gets free and accuses the Professor, who denies wrong-doing. Scarlet and Sandy come back that night to investigate, but by then the Professor is in the grips of the real villain.
Reprints

Blood of a Monster, Part 2: Demons of the Deep (Table of Contents: 3)

Genre
detective-mystery; adventure; superhero
Characters
Scarlet O'Neil; Sandy; the Fiend (villain)
Synopsis
Sandy falls prey to the Fiend, who leaves Sandy for dead. The Fiend captures Scarlet despite her invisibility, and plans to feed them both to the Aquarium's sharks. Sandy comes to, and their struggle carries them all into the piranha tank. Sandy and Scarlet escape, and save the Fiend from a cruel death.
Reprints

Grave of Greed [Part One] (Table of Contents: 4)

Genre
detective-mystery; adventure; superhero
Characters
Scarlet O'Neil; Mrs. Miterbox; Roscoe Roland (villain)
Synopsis
Skinflint landlady Mrs. Miterbox has squirreled away a fortune, which she keeps stashed in her boarding house while living a life of misery. Ne'er-do-well Roscoe Roland happens to become aware of the fortune, and takes a room at Mrs. Miterbox's establishment under an alias. Detective Scarlet comes looking for Roland, but will Mrs. Miterbox, who is working on a scheme to gain her border's imagined fortune, reveal him?
Reprints

Genre
detective-mystery; adventure; superhero
Characters
Scarlet O'Neil; Mrs. Miterbox; Roscoe Roland (villain)
Synopsis
Mrs. Miterbox conceals the presence of Roscoe Roland from Scarlet, scheming to get her hands on Roland's imagined fortune. Roland has his own scheme's, and Scarlet can't get to the truth of the matter before Roland and Miterbox execute on their murderous plots.
Reprints

Tricks of the Invisible to Amaze Nonbelievers (Table of Contents: 6)

An outline of five magic tricks and the secrets to performing them. Printed in black & white on inside back cover.