Ames's shirt is colored green instead of red like inside. 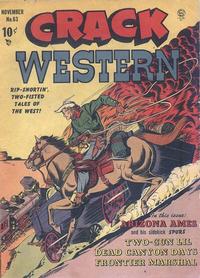 War of the Renegade Rails (Table of Contents: 1)

Originally credited to Charles Quinland. The faces and figures are the work of Sultan, and best seen on the face in side view in panel 4 first page, and on splash.

The Battle of the Paper Bullets (Table of Contents: 3)

The Golden Ghost (Table of Contents: 5)

Originally also credited on inking here, but Anderson is only credited on pencils on this feature by Jerry Bails' Who's Who, and his very special lines outside the corners of the eyes are missing, so his inking is very unlikely here.