Same artist as on the main story. Notice horse and legs in boots. 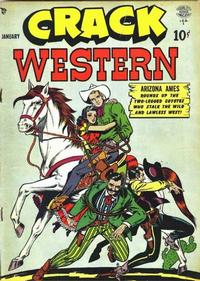 Gustavson is credited on this feature by Jerry Bails' Who's Who, and the black eyes and heavy jaw bones are sure signs of his work.

The Forbidden Star (Table of Contents: 2)

Of the artists credited to this feature by Jerry Bails' Who's Who, Morey is the most probable.

The Fighting Wreck (Table of Contents: 3)

Red for Danger (Table of Contents: 4)