Jim Vadeboncoeur, Jr at Digital Comics Museum has Gustavson on this cover. 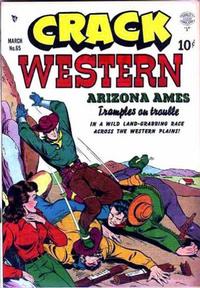 The Dance Hall of Death (Table of Contents: 2)

Genre
western-frontier
Characters
Lil Peters [Two-Gun Lil]; Clinton (undercover US Marshal); Higgins (piano player); Weland (proprietor; villain)
Synopsis
A US Marshal has been murdered when investigating crooked games in a dance hall. Lil takes a job as a singer to find out who killed the Marshal.
Reprints

JVJ has a doubtful Bryant as penciller.

The Man Afraid of a Saddle (Table of Contents: 3)

Jim Vadeboncoeur Jr. has Crandall only on pencils, and Roger Hill agrees, but Steinar Ådland believes the inking is so similar to Crandall's inked stories in the Warren magazines of the 60s that this is most probably all his work.

The Other Gun (Table of Contents: 4)

The Day of Empty Holsters (Table of Contents: 5)

JVJ notes at Digital Comics Museum have these two doubtful pencilers. Inking looks much like the work on many of the Manhunter stories, especially faces.