Photo credits from inside front cover.

Western actor and actress in a scene from a B-Western. 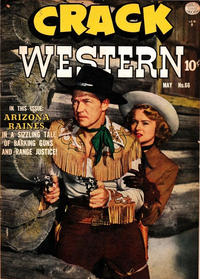 Even Frontier Terrorists Can Learn! (Table of Contents: 2)

Feud Bullets in the Dead Canyon Country! (Table of Contents: 3)

Action Stored Away (Table of Contents: 4)

They're Holding Up the Stage! (Table of Contents: 5)

The layout and figure movement are similar to many of Anderson's credited stories, as in T-Man Comics, Nyoka, and Mr. Scarlet and Pinky. His peculiar lines outside corners of eyes are missing, but he is only credited on pencils on this feature by Jerry Bails' Who's Who.