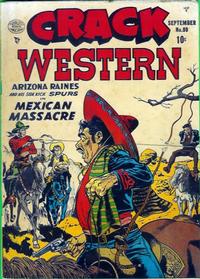 First Line of Dialogue or Text
Once upon a time, across the border in gay Mexico...
Genre
western-frontier
Characters
Arizona Raines

The Murder on Stage! (Table of Contents: 2)

The broad faces with round eyes and small mouth are the art of Morisi. He is credited on this feature by Jerry Bails' Who's Who.

First Line of Dialogue or Text
Snow means many things to many people, to Eskimos it's...
Genre
western-frontier
Characters
Bob Allen; Kortner (villain); Tim Acres (farmer)
Synopsis
Allen is out in the snow nailing up posters and discovers the outlaws are hiding on a nearby farm.

Originally credited an uncertain Harry Anderson. Not him. This art has much the same close up faces, figures and very large guns as in Certa's Durango Kid stories. He is the most probable on pencils.

A Ranger Again (Table of Contents: 5)

Sultan is credited on pencil on this feature by Jerry Bails' Who's Who, and the eyes gives him away.