The Secret of Terror Canyon (Table of Contents)

The faces with wide open eyes, and horses are by Crandall, and he is credited on pencils and ink on covers for Quality Comics by Jerry Bails' Who's Who. 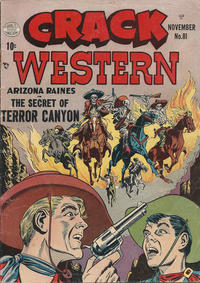 Arizona Raines and the Secret of Terror Canyon (Table of Contents: 1)

Genre
western-frontier
Characters
Arizona Raines; Thunder (a horse); Spurs; Calico (a horse); Pedro Mortez (villain, death)
Synopsis
The only way to get Mortez and his gang in Terror Canyon is by trickery.

Pencils: Ger Apeldoorn suggests Morisi.
Morisi is credited on pencils and ink on this feature by Jerry Bails' Who's Who, and the round eyes in round faces, and sneering mouth in sideview are similar to his signed stories in Danger #2 (Comic Media).

Sultan is credited on pencils on this feature by Jerry Bails' Who's Who, and some faces with pouchy lines under the eyes in side view point to him.

The layout with many heads halfway inside the panel borders, and shouting faces that are very similar to many of Anderson's credited stories, as in T-Man Comics and Nyoka. His peculiar lines outside corners of eyes are missing, but he is only credited on pencils on this feature in Jerry Bails' Who's Who.
Title from reprint.