The Killer with a Thousand Faces (Table of Contents)

Despite the fact that the cover and the first story have the same title, the cover scene happens nowhere in the first story.
Crandall is credited on this cover by Jim Vadeboncoeur, Jr at Digital Comics Museum. 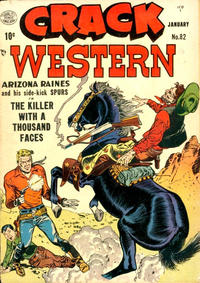 The Killer with a Thousand Faces! (Table of Contents: 1)

Genre
western-frontier
Characters
Arizona Raines; Thunder (a horse); Spurs; Calico (a horse); Eric Arno (villain)
Synopsis
A master of disguise has escaped from a lunatic asylum and has picked five men for death in his desire for revenge.
Reprints

Jim Vadeboncoeur, Jr. at Digital Comics Museum has Gustavson only on pencils here. However, Terry Gustafson (son of Paul Gustavson) has confirmed Gustavson on script, pencils, inks and letters.

First Line of Dialogue or Text
There is no fury like the fury of a woman who is out to exact revenge...
Genre
western-frontier
Characters
Lil Peters [Two-Gun Lil]; Bush Peters (killer); Sandy Jones; Rita
Synopsis
A woman is out to avenge the murder of her lover and accuses Lil of the killing after finding a piece of her shirt sleeve at the scene of the murder.
Reprints

Pencils:
1) Most probably Sultan on pencils. He is credited on pencils on this feature by Jerry Bails' Who's Who, and the horses are identical to those in the Whip story in Crack Western #84. Compare page 5 panel 4 here with page 4 pane 7 in #84.
2) Reed Crandall suggested by Saltarella