Same art as the Bob Allen story inside. 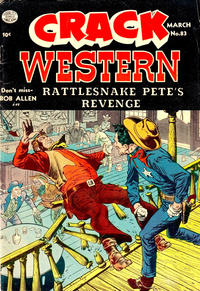 First Line of Dialogue or Text
Fort Jennings was a tiny flag raised in hostile territory
Genre
western-frontier
Characters
Arizona Raines; Spurs; Blue Flame; Ricardo Portego; Little Panther
Synopsis
Ricardo Portego joins ranks with Blue Flame to take over Fort Jennings, because he wants the land and the silver he could mine from it.

The Fiend in Knee Pants (Table of Contents: 2)

Pencils:
1) Morey is one of four artists credited on this feature by Jerry Bails' Who's Who, and the long bony face of Doc is very similar to Morey's credited story in Frogman Comics #5.

The Dead Shot (Table of Contents: 4)

Genre
western-frontier
Characters
The Whip [Johnny Lash]; Diablo (The Whip's horse); Jeb Haskins (death); Mr. Jonas; Lupo Dorish [aka The Dead Shot] (villain, death); Lupo's gang [Ed (death); Chub (death); others un-named (all die)] (villains)
Synopsis
Johnny heads for the bank to cash a check where he learns that Lupo Dorish and his men have just cleaned every penny out of the bank, killing the Sheriff and one other. Johnny spots the tell-tale trademark of the killer: a shot neatly placed between the eyes.
Reprints
Keywords
Blackville

Sultan is credited on pencils on this feature by Jerry Bails' Who's Who, and some faces with pouchy lines under the eyes in sideview point to him.

Draw against Death (Table of Contents: 5)

Same art as in the Bob Allen story in #84. Lanky figures and faces with bright eyes are Crandall.

You Can Be a Popular Harmonica Player (Table of Contents: 8) (Expand) /