The Revolt at Broken Creek (Table of Contents)

Same art as in the main story by Gustavson. 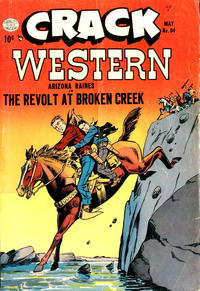 The Revolt at Broken Creek! (Table of Contents: 2)

The Kissing Monster (Table of Contents: 3)

Edmond Good is cedited on this feature by Jerry Bails' Who's Who, and can be spotted by his rounded faces with rather large eyes.

Sultan is credited on pencils on this feature by Jerry Bails' Who's Who, and some faces with pouchy lines under the eyes in sideview point to him.

The Other Gun (Table of Contents: 7)

Statement of the Ownership, Management, and Circulation (Table of Contents: 8)

Five against the Law (Table of Contents: 9)

I Will Train You at Home for Good Pay Jobs in Radio-Television (Table of Contents: 12) (Expand) /