No Second Chance (Table of Contents) 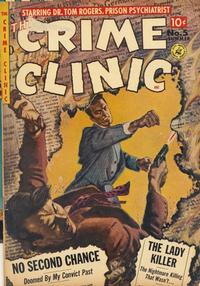 No Second Chance (Table of Contents: 2)

John Prentice is credited to both pencils and ink on "The Crime Clinic" by Jerry Bails' Who's Who, and his excellent hands and long sober faces with rounded lips here, are like his Rip Kirby art.

One Last Hope (Table of Contents: 4)

Genre
crime
Characters
Robert Cranshaw; William Jayson Sykes
Synopsis
Board chairman Sykes originally denies parole for Robert Cranshaw, but after he is hit on the head and imagines himself in prison, he changes his mind.

McCann can be identified here by his old faces with long noses, pointed ears, small chin and very much flat black inking instead of Kinstler's many pen-lines. Notice also the peculiar pointed caps of police officers, which can be found in most of his stories in Hillman's "Frogman" comics. He drew the Classics Illustrated "The Conspiracy of Pontiac" and "Off on a Comet". This is the best reference to McCann. The original indexer credited the pencils and inks to "Everett Raymond Kinstler"

The Two-Bit Hierloom (Table of Contents: 8)

Genre
crime
Characters
Jake Dutton
Synopsis
Jake Dutton is released from jail but goes back to a life of stealing jewels, starting with the Bradley Pearls.

This is the same artist credited by Jim Vadaboncouer as the most probable artist for several stories in "Wild Boy" as "Frank Kramer," and his art has some similarities to both Kinstler and mostly McCann, with all his black inking and little action. The best reference is to look at his story "Perilous Journey" in Wild Boy #6. He is not as elaborate in inklines as Kinstler is. The original indexer credited the pencils and inks to "Everett Kinstler ?".

Bottom half of page is ad for book on Hypnosis.

The Lady Killer (Table of Contents: 11)

Genre
crime
Characters
Dr. Tom Rogers; Harvey Sheppard
Synopsis
Harvey Sheppard, the penitentiary librarian, is in jail for killing his wife but Dr. Rodgers thinks he may be acting a martyr and covering up for his wife's ex-lover.

First Line of Dialogue or Text
Identification? Will this do?
Genre
humor
Synopsis
Six gag panels about criminals.