And Now...Batwoman! (Table of Contents) 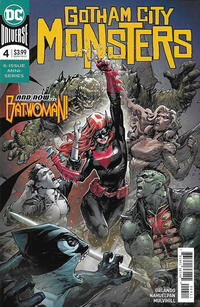 Story takes place in Monstertown while Bane is in control of the rest of Gotham City during the City of Bane storyline in Batman (DC, 2016 series) #75-85.

The Monster League of Evil show up on the last page of this issue. The Monster League was previously introduced via flashback in Superman #276 (June 1974). They are from a parallel Earth, and are the enemies of that world's hero, Captain Thunder.