City of Bane (Table of Contents) 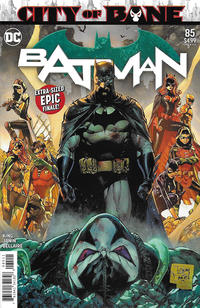 Genre
superhero
Characters
The Joker; Henry (Joker henchman); other unnamed Joker henchmen; Superman [Clark Kent; Kal-El] (image on screen)
Synopsis
Learning that Superman has revealed his secret identity of Clark Kent to the world, the Joker is inspired to launch a final battle against Batman.

Prologue to a new Joker storyline. Story ends with a note "The End is Coming in 2020".

Superman revealed his secret identity to the world in Superman (DC, 2018 series) #18.