The title of the lead story is featured on the cover, but the illustration has no connection to any story in this issue. Rather, it is a depiction of a story entitled "You Are the Murderer," which subsequently appeared in Crime Mysteries #9.
Beginning with this issue, the cover's title includes: "Combined with Crime Smashers", the last issue of which appeared 2 months earlier. 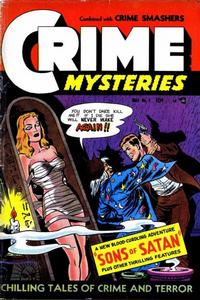 Sons of Satan! (Table of Contents: 2)

Dead at the Wheel! (Table of Contents: 3)

The Case of China's Stolen Funds! (Table of Contents: 4)

Terror in the Dark (Table of Contents: 5)

First Line of Dialogue or Text
Sally is the able assistant of 'The Chief', a private detective, but once in a while...
Genre
detective-mystery
Characters
Darlene Ronsdale (Sally's school chum)