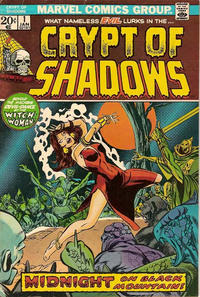 Job Number
E-538
Genre
horror-suspense
Synopsis
A woman with a terminal illness meets a man who tricks her into becoming a witch.
Reprints

Where Monsters Dwell (Table of Contents: 2)

Job Number
8773
Genre
horror-suspense; science fiction
Synopsis
A scientist finds a way to exile his enemies to another dimension, but one manages to escape and change places with the scientist.
Reprints

Irrelevant Info and Inane Items, Illustrated and Inscribed by an Infinite Number of Monkeys! (Table of Contents: 3) (Expand) /

Job Number
A-537
Genre
horror-suspense
Synopsis
A madman offers to give an attorney a magic mirror that reveals how people will look in the future but there is a secret terrible cost.
Reprints

The Scarecrow (Table of Contents: 5)

Job Number
A-500
Genre
horror-suspense
Synopsis
Scrawny Tim Blake buys a magic potion to build up his muscles, which is very successful at first, until it sends his body out of control.
Reprints