The Colossus That Challenged the World! (Table of Contents) 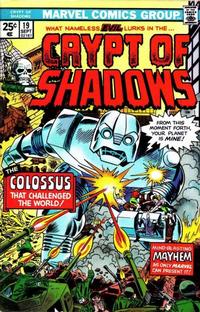 I Fought the Colossus! (Table of Contents: 1)

Job Number
[T-463]
Genre
science fiction
Characters
Prof. Reynolds; "Colossus" supercomputer
Synopsis
An advanced supercomputer turns Earth into a utopia, but suspicion remains, only to be inflamed when it is found to be building a giant robot. Humanity turns on the computer and destroys the robot, only to find that it was intended to replace the supercomputer, which breaks down, leaving humanity without its intelligence.
Reprints

The Hidden Martians (Table of Contents: 2)

Earth Will Be Destroyed! (Table of Contents: 3)

Job Number
[T-641]
Genre
science fiction
Synopsis
Aliens plot to devastate Earth before invading, but they cannot pinpoint its location. They are unaware that they are on Earth as a speck of dust in a petri dish, which is casually discarded.
Reprints

This concept was re-used with a single creature in Tales to Astonish (Marvel, 1959 series) #18 (April 1961) as "Monsteroso!" drawn by Steve Ditko and in Amazing Adult Fantasy (Marvel, 1961 series) #9 (February 1962 series) as "The Terror of Tim Boo Baa" by Stan Lee and Steve Ditko. Stan Lee is speculatively credited as the writer on the basis of his authorship of the second re-telling.

He Never Reached the Ground! (Table of Contents: 4)