Rating and UPC on back cover.
This issue is a variant of Archie: The Married Life - 10th Anniversary (Archie, 2019 series) #4 [Cover C - Billy Tucci]. There exist further variants: 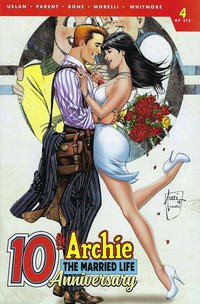 This is actually Part Four of the story.