First Line of Dialogue or Text
How could he fall for that line?
Genre
romance 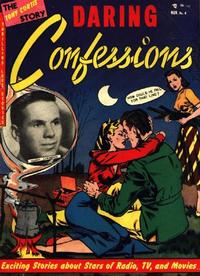 Genre
romance
Characters
Elliott Lawrence; Angie Craig; Larry Lawton; Miss Green; Gwynne Ames
Synopsis
Angie gets the lead in the Midwest U annual show, produced by bandleader Elliott Lawrence. She decides to quit school and become a professional singer, although she's not good enough. Her boyfriend Larry asks Mr. Lawrence to dissuade her: Lawrence asks his vocalist Gwynne to make up a story about how she lost her own boyfriend due to the demands of her career. Angie changes her mind and will stay in school. Unfortunately for Lawrence, Gwynne also decides to quit her job and get married.

Although the title on the splash panel is "Elliott Lawrence," Lawrence refers to the story in the caption as "Angie's Antics."

Elliott Lawrence was a real-life bandleader who plays himself in the story. However, it cannot be confirmed that his vocalist "Gwynne Ames" was also a real person.

Larry Lawton is called "Harry" in the splash panel.

Where is My Love? (Table of Contents: 2)

Genre
crime; romance
Characters
Ruth Martin; Will Howard
Synopsis
Ruth and Will are reporters for a newspaper which is taken over by new management. They fall in love but Will is unhappy with the paper's direction; he thinks it's become a scandal sheet that blackmails the subjects of potential stories. Will is afraid Ruth is involved but she's actually helping the authorities expose the racket. Will and Ruth get married.

Touchdown for Love (Table of Contents: 5)

Genre
romance; sports
Characters
Dick Talbot; Tina; Coach Weldon
Synopsis
When football player Dick quits the team after an injury, the coach asks co-ed Tina to become his girlfriend and convince him to play. Tina agrees: she really falls in love with Dick but asks him to play for her sake. Dick learns the truth and breaks up with her. He rejoins the team and is hurt again. Tina's sincere remorse reunites them. Dick explains that he has an Air Force commission waiting for him after graduation and didn't want to jeopardize his health. However, he recovers, joins the service, and marries Tina.