My Guilty Heart (Table of Contents) 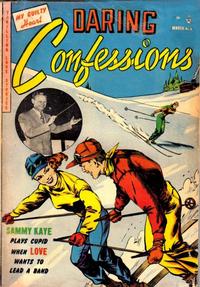 So You Want To Lead A Band (Table of Contents: 1)

Genre
romance
Characters
Sammy Kaye; Hal Harrison; Betty Crawford; Mrs. Crawford
Synopsis
Bandleader Hal's girlfriend Betty disagrees with his decision to stick with his music career rather than take a steady job "at the plant." She wants security before marriage, and asks famous bandleader Sammy Kaye to discourage Hal's ambitions. Instead, Sammy gives Hal an introduction to his booking agent, and Betty breaks up with Hal. Hal's band becomes successful but Betty refuses to see him. Sammy invites Betty to his television broadcast and reunites her with Hal.

Sammy Kaye was a real-life bandleader and had a television show titled "So You Want to Lead a Band."

Genre
adventure; jungle; romance
Characters
Reed Marlow; Miss Hadley; Mr. Green; Captain; Governor
Synopsis
Adventurer Reed and Miss Hadley flee river pirates in southeast Asia. They fall in love on their trek to safety. When they reach town, Miss Hadley learns Reed is wanted for murder and risked his freedom to save her. The governor says Reed is now cleared of suspicion and he and Miss Hadley can marry.

Miss Hadley is not given a first name in this story. Reed refers to her as "Beautiful."

My Guilty Heart (Table of Contents: 4)

Genre
romance
Characters
Glenna Winther; Dave; Dr. Hal Wright; Bruce
Synopsis
Driving home with Dave, wealthy Glenna thinks she struck someone but Dave insists she keep going. Glenna visits the local orphanage and learns little Bruce was hurt the night before and will never walk again. Glenna dedicates herself to helping the orphanage and falls in love with Dr. Hal. An operation restores Bruce to health, but Dave reveals Glenna's culpability in the accident to Dr. Hal. Glenna gives herself up to the police and is given a suspended sentence. She can now marry Dr. Hal and adopt Bruce.

Feet of Clay (Table of Contents: 5)

Genre
romance; sports
Characters
Gloria; Dave Foster; Mike Campo; Pierre
Synopsis
Nightclub hatcheck girl Gloria is engaged to Dave, but boxer Mike steals her away. "He's really man!" Gloria says, but Dave warns her that Mike will dump her for someone else, but she doesn't believe him. After a big fight, Mike tells Gloria they're through and insults her: Dave knocks him out and Gloria decides he's manly enough for her.
Keywords
boxing