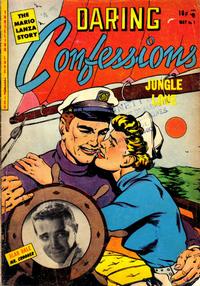 Genre
romance
Characters
Alan Dale; Terry Ramsey; Mr. Tremaine; Mrs. Tremaine; Larry Kincaid; Mr. Kincaid
Synopsis
Schuyler U students Terry and Larry are in love. She fears Larry's high-society parents would reject her if they knew her parents were "The Tremaines," professional dancers. Singer Alan Dale decides to help out: he invites the Tremaines to perform on his show at Schuyler and tricks Terry into dancing with them. Larry and his father have no issues with Terry's show business connections and Larry marries Terry.

The top of the first page lists the title as "Alan Dale 'Mr. Crooner'" but the caption (narrated by Alan Dale) suggests the story title is "Her Secret."

Alan Dale was a real-life singer.

Genre
jungle; romance
Characters
Barbara Merrick; Jim Anthony
Synopsis
Jim is the substitute guide for wealthy hunter Barbara's African safari. She is spoiled and headstrong but after Jim rescues her from a charging lion, they decide they are in love.

Love Will Find a Way (Table of Contents: 4)

Genre
humor; romance
Characters
Tracy Evans; Greg Lawrence
Synopsis
Greg dates Tracy but her clumsiness and bad luck results in a number of painful and embarrassing accidents for him. He breaks up with her and goes to stay on his uncle's farm, only to discover Tracy is staying on the next farm. Giving in to fate, Greg says they may as well get married.

Shadow of the Past (Table of Contents: 5)

Genre
romance
Characters
Roy; Elaine; Lou Fain
Synopsis
Shortly before their wedding, Roy discovers his fiancée Elaine was formerly the girlfriend of mobster Lou. Elaine broke up with Lou when she witnessed his brutal activities, but he refused to let her go and she was with him when he was shot to death. She moves to a small town and falls in love with Roy. Now she plans to leave but Roy apologizes and asks her to stay.

JVJ index card attached to online scanned version lists "Harrison" for art. George Harrison seems to be the likely candidate, based on his career credits in Bails.