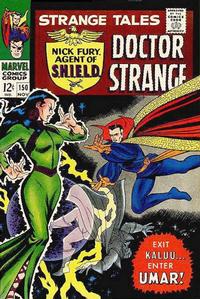 Genre
spy
Characters
Nick Fury; Jasper Sitwell; Dum Dum Dugan; Senator Dudley (member of Plans & Operations Section); Supreme Hydra ["Don Cabellero"]; HYDRA
Synopsis
Fury subjects himself to a dangerous test in order to prove that an atomic missile can be detonated long-distance by a sonic weapon which SHIELD believes HYDRA has. While both he & Dugan are recovering from injuries, Don Cabellero, at the urging of an undercover SHIELD man, invites Fury to a party in ancient Karnopolis in the Sahara Desert. Caballero is a disguise for the new Supreme Hydra, who is aware a SHIELD agent has invaded his ranks. Fury tells Sitwell he will be in command during his absence but suddenly a sonic boom shakes the HQ as the Overkill Horn is being tested.
Reprints

Part 1 of 9. 1st appearance of the new Supreme Hydra, later revealed to have been its real leader all along, behind-the-scenes. In this episode, Jasper Sitwell is a dead ringer for Roy Thomas!

Sensational Secrets and Incredible Inside Information, Guilessly Guaranteed to Avail You Naught! (Table of Contents: 2) (Expand) /

The Conquest of Kaluu! (Table of Contents: 3)

Genre
superhero
Characters
Kaluu; Dr. Strange; The Ancient One; Griffin (Babylonian beast); Mindless Ones; Clea; Umar (Dormammu's sister)
Synopsis
Kaluu realizes Strange and the Ancient One have escaped to the past of ancient Babylonia where The Ancient One obtains The Book Of The Vishanti. Before Kaluu can extinguish the Flames of the Faltine, Strange returns to the present with the mystic book which hurls his spell back to him. The Ancient One sends Kaluu into Limbo for all time. In The Dark Dimension Clea fears the onslaught of the Mindless One's freed from their prison with Dormammu gone. But another former prisoner controls them: Umar, Dormammu's sister, who vows his deeds shall pale beside hers.
Reprints

Part 4 of 22. 1st appearance of Umar. Candles used in time-travel previously used in STRANGE TALES #124 (September 1964). Due to the growing use of soap-opera format, Kaluu's story runs straight into Umar's without a break between episodes. It seems ironic that Kaluu was described as being more powerful than Strange & his mentor together, yet with this episode he vanished, never to return; while Umar became a long-running villain still appearing to this day.

First Line of Dialogue or Text
Dear Stan, I am writing this letter to praise...
Reprints