First cover where Cat-Man is not hyphenated. 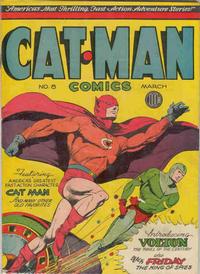 The Spymaster's Doom! (Table of Contents: 2)

Cat Man's name sometimes has a hyphen, sometimes not.

Who's Who of American Comics Books 1929-1999 indicates that Herman and Schrotter used the pseudonym "Gus Herman" on joint work. Presumably one pencilled and the other inked.

Logo for the feature calls it just "Friday".

Genre
adventure
Characters
Frank Fairplay; Will Maitland; Tom Patton; Mr. Morris; Buff Branner
Synopsis
As punishment Frank and his friends are forbidden from attending the local carnival after the Dean catches them wrestling in their rooms.

It is possible that this story is a reprint of, or at least based on, stories in British magazine's from the late 1800s. Frank Fairplay was a character that appeared in a number of issues of Boy's Standard (1875-1892) in stories entitled Frank Fairplay's Schooldays.

First Line of Dialogue or Text
Flash! Enemy Planes Reported Off-Shore!
Genre
superhero
Characters
Volton (first appearance); gang of thugs; police captain
Synopsis
When enemy planes are reported off-shore, Empire City must be blacked out. Taking advantage of the darkness, gangsters attempt to rob the city bank. Volton senses the use of electricity, and arrives at the bank to thwart the thieves. When the raid is over, it is discovered that the lights won't turn back on. Volton investigates the power plant, and discovers more of the gangsters there.
Keywords
Empire City

First appearance of Volton. This is not the same Volton that previously appeared in Worth Carnahan's Cyclone Comics.
This is Joe Kubert's first known professional work.

The Green Vampire (Table of Contents: 9)

Genre
superhero
Characters
The Pied Piper; Mr. Ford (death); Helen Ford (Ford's daughter); The Green Vampire (villain, death)
Synopsis
Mr. Ford is attacked and killed by the Green Vampire, which draws the attention of the Pied Piper and leads him to the Ford mansion to await the return of this evil being and prevent him from also killing Ford's daughter.

The Piper gains powers from his magic flute.

First Line of Dialogue or Text
Was Mickey to be the next victim of the Inner Circle?
Genre
superhero
Characters
Mickey; Kitten [Katy Conn]; David Merrywether; Deacon; Butch; Sarah; Professor; Nazi soldiers
Synopsis
Kitten and Mickey go on summer camp at the same time and together foil a plot by Nazis.

Little Leaders are Kitten and Mickey, the Deacon's sidekick.
This is the second part of a 2 part story. The first part appears in the next issue (#9 on cover or V2#14 in indicia, Apr 1942), the two parts were published out of order.

First Line of Dialogue or Text
What happens when a lone defender defies the overwhelming onslaught of the descpicable yellow horde?
Genre
superhero
Characters
Hood; Japanese Commander; Japanese soldiers and sailors; Emperor Hirohito
Synopsis
The Hood is captured by the Japanese.

Most Amazing Sight You Ever Saw! (Table of Contents: 17) (Expand) /