Indexed from a scan from http://digitalcomicmuseum.com/index.php. The scan is missing the Dan Brand story, so its location within the issue is uncertain. 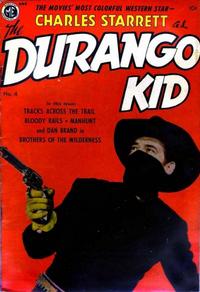 Durango to the Rescue! (Table of Contents: 1)

Tracks Across the Trail! (Table of Contents: 2)

Genre
western-frontier
Characters
Durango Kid [Steve Brand]; Raider (the Kid's horse); Muley Pike; Pete Lawson (villain)
Synopsis
The Kid and Muley come across a railroad holdup by criminals who are wrecking the engine. As he investigates, the Kid discovers the reason behind these destructive episodes: the cattle ranchers are afraid that the railroads will break up grazing lands and bring in competitors.
Reprints

Notice the funny horse face on page 5, and bad guy with teeth showing in sideview on page 2. Some clues to Certa.
Art ID by Steinar Ådland December 2010

Brothers of the Wilderness (Table of Contents: 5)

Genre
adventure; western-frontier
Characters
Dan Brand [White Indian]; Tipi; Ann Cartwright; Mr. Cartwright; Eye (villain)
Synopsis
Dan and Tipi have been acting as guides for a group of pioneers pushing their way through the Appalachian Mountains. They stop for the night and a wildcat threatens the life of Ann Cartwright. Saving her, he is asked to give up the way of the Indian and settle down, which prompts a dejected Tipi to leave and return to his own people. Meanwhile, Ann and her father are captured and held for ransom by a group of forest bandits. Tipi returns with some of his tribe to save them and discovers that Dan's answer to giving up his Indian ways was a resounding "no", and so stays on with his best friend.
Reprints