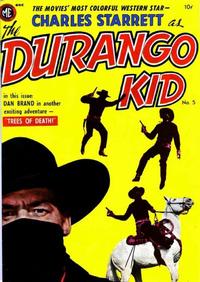 First Line of Dialogue or Text
Protector of the weak...
Genre
western-frontier

Trees of Doom! (Table of Contents: 4)

Genre
adventure; western-frontier
Characters
Dan Brand [White Indian]; Tipi; MacShane; Brack (villain)
Synopsis
Brack, owner of a rival lumber company, incites the Indians to attack MacShane's lumber camp. Greatly outnumbered, Dan comes up with an elaborate trap. He then races after the boastful Brack and punches him squarely in the face. The Indians acknowledge Dan as the word of justice.
Reprints

Count Your Bullets! (Table of Contents: 5)

Wanted for Murder! (Table of Contents: 6)