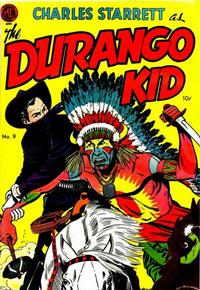 First Line of Dialogue or Text
Durango twirls a sure lariat...
Genre
western-frontier

War on the Sioux Trail! (Table of Contents: 2)

The Battle of the Dams! (Table of Contents: 3)

Genre
adventure; western-frontier
Characters
Dan Brand [White Indian]; Tipi; General George Washington; Jarvis; D'Arcy (villain, death); Solomon
Synopsis
Dan returns to his home town of Philadelphia, in order to raise money and goods to sustain General Washington's forces during the coming winter. He meets with derision and prejudice among his former friends and neighbors, but Solomon offers all his worldly wealth for the cause. When Dan and Tipi arrive at his house that evening they find he has been attacked and the money stolen. The same glove which slapped Tipi round the face earlier reveals that the culprit was D'Arcy. Finding him gloating in a tavern with friends, Dan runs him through with a sword then brings the money back to Washington.
Reprints

Law of the Hangman's Noose (Table of Contents: 7)

On the inside back cover.