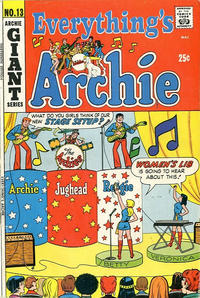 Characters
The Archies [Archie Andrews; Jughead Jones; Betty Cooper; Veronica Lodge; Reggie Mantle]; Willie
Synopsis
The Archies stop at a spooky house when they are caught in a storm and get caught up in the search for a missing heir.
Reprints

The Pose (Table of Contents: 2)

Characters
Archie Andrews; Moose Mason
Synopsis
Archie tries to stop Moose from punching him by getting him to pose for a snapshot.
Reprints

Genre
teen
Characters
Reggie Mantle; Veronica Lodge; Betty Cooper; Archie Andrews; Jughead Jones; Mr. Weatherbee; Professor Flutesnoot; Miss Grundy
Synopsis
After Reggie scores the winning basket for Riverdale, he gets upset when Archie and Jughead praise him like everyone else does because he's convinced they are only being sarcastic.
Reprints

World of Archie Double Digest (Archie, 2010 series) #66 credits Samm Schwartz with art but that credit seems to be incorrect.

Credits from the index of the original printing.

Genre
teen
Characters
Betty Cooper; Veronica Lodge
Synopsis
Veronica buys a vacuum cleaner from a handsome salesman, and tries to get it off her hands by selling it to someone else.
Reprints

Genre
teen
Characters
Archie Andrews; Coach Kleats
Synopsis
The Coach is happy to hear that Archie won't be going out for the basketball team because he's now the sports reporter for the school paper.
Reprints

The Moose Is Loose (Table of Contents: 12)

Genre
teen
Characters
Archie Andrews; Betty Cooper; Veronica Lodge; Reggie Mantle; Jughead Jones; Dilton Doiley; Moose Mason; Ethel Muggs; Hiram Lodge; Pop Tate
Synopsis
Archie comes up with a get-rich-quick scheme that all the kids want to get in on, but they are nearly swindled out of their money by a crooked stockbroker.
Reprints