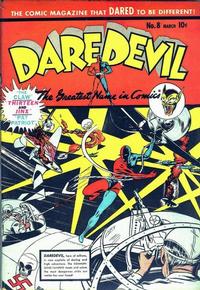 [The Return of Sniffer] (Table of Contents: 1)

The masthead reads Daredevil "The Greatest Name in Comics".

Genre
superhero
Characters
Thirteen [Harold Higgins]; Jinx [Darrel Creig]; Marie Duvall; Red (armored car driver, death); Mike (armored car driver, death); King Questionmark [also as Mrs. Dodge] (villain); Hitler (villain, introduction, gangster); Goebbels (villain, introduction, gangster); Lord Haw Haw (villain, introduction, gangster)
Synopsis
Thirteen, Jinx and Marie make it out of the burning house and to a car that they hope to make a get-away in, believing that King Questionmark has perished in the fire. But the King has survived and knocks over an armored car for the cash, accidently leaving one of his cronies behind for the Police to capture. Unfortunately for Thirteen and Jinx, King Questionmark busts Gobbels out of jail and the villain casts a bomb into the air.
Reprints

The Hitler, Goebbels and Lord Haw Haw in this story are not their Nazi namesakes.

Genre
superhero
Characters
Nightro [Hugh Goddard]; Joe (grocery store owner); Tony; New York Benny (villain, introduction, flashback, death); Buggs (villain, flashback)
Synopsis
Hugh is walking the streets when he sees two young boys pull a fast one on a grocer. After stopping them and repaying the grocer, and hoping to turn them from a life of crime, Hugh tells them the story of New York Benny.
Reprints

Genre
superhero
Characters
Pat Patriot [Patricia Patrios]; Delznic (movie producer); Keef (guard on the set); Mr. Reynolds (Boy Scout leader); Walter Mills (villain, actor); Fritz Haubner (villain, introduction, death)
Synopsis
Miss Patriot is invited on set to watch a new war movie being made called "Fight to Die," and meets the star of the movie, who has fallen for her. However, little does Pat know that the star of the film is in on a Nazi plot to sabotage the nearby aircraft plant.
Reprints

This Page Is Reserved for Sniffer (Table of Contents: 7) (Expand) /

[The Oil Racketeers] (Table of Contents: 8)

Genre
adventure
Characters
Bronze Terror [Jeff Dixon] (lawyer); Fred (gas station attendant); Lefty (villain, introduction); Flaps (villain, introduction)
Synopsis
When Jeff sees a friend of his being beaten up at a gas station, he wades into them, gives them a shellacking, and lets them go, not realizing they are criminals that had just committed a heist. Hiding out on an Indian reservation, Lefty sees a pool of oil on their land and buys it for $25,000...but he doesn't realize he has been taken!
Reprints

In several panels of the story, an Indian is seen reading a copy of Silver Streak Comics.

Bill Black confirms that Robinson wrote the story, so ? removed. The Boar returns in the next issue. Robinson signs both first and final panels.

[Case of the Missing Mayor] (Table of Contents: 11)

The Claw versus The Ghost / comic story / 7 pages (report information)

Genre
superhero
Characters
The Claw (villain); The Ghost [Brad Hendricks]; unnamed Mayor; Adolf Hitler (villain, cameo); Yong (villain)
Synopsis
After battling the Ghost and possibly killing him, the Claw disappears. But the Ghost is not dead and wonders why his enemy has vanished...until he hears that the Mayor has been kidnapped and would be murdered unless the city surrenders.
Reprints