Later redrawn for the cover of Archie... Archie Andrews Where Are You? Comics Digest Magazine #56. 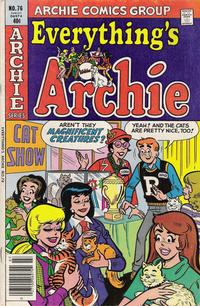 For the Birds (Table of Contents: 2)

A Lot to Learn (Table of Contents: 6)

Credits from the reprint in World of Archie Double Digest (Archie, 2010 series) #25.

Orders Is Orders (Table of Contents: 7)

First Line of Dialogue or Text
No way, buddy! I don't have a jealous bone in my body!
Genre
humor; teen
Characters
Archie Andrews; Jughead Jones; Veronica Lodge; Reggie Mantle
Synopsis
Archie declares that he's going to "play it cool" where Veronica is concerned, while Jughead calmly predicts that his buddy will just make a fool of himself as usual.
Reprints

The credits for the reprint in Jughead's Double Digest (Archie, 1989 series) #196, Harry Lucey is credited with the inks on this story.