Reprint of The Batman Adventures #12 September 1993 issue, the first comics appearance of Harley Quinn. In addition to #12 on the cover, there is also a #1 on the lower left of the cover, but the #1 is not shown in the indicia. 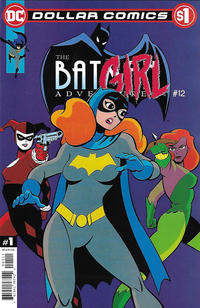 Batgirl: Day One (Table of Contents: 1)

Story ends with a promo "To be continued in The Batman Adventures graphic novels".