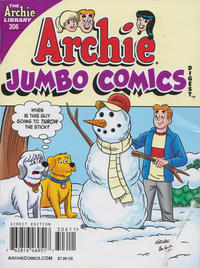 The Dating Analysis (Table of Contents: 2)

Archie
Genre
humor; teen
Characters
Archie Andrews; Fred Andrews; Veronica Lodge
Synopsis
Archie's father tells him to clean up his room before he can go on his date with Veronica. He results to the old trick of filling his closet to the bursting point, but then gets distracted by old photos and a video game.
Reprints
Keywords
closet; guitar; photographs; video games

Archie
Genre
humor; teen
Characters
Archie Andrews; Mr. Weatherbee [Waldo Weatherbee]; Betty Cooper
Synopsis
Archie gets angry when Mr. Weatherbee informs him that the two dollars he paid towards the class ski trip was for insurance instead of lunch.
Reprints

First Line of Dialogue or Text
I got this catalog from a book-seller, Betty!
Feature Logo

Connie Lung is a parody of CNN reporter Connie Chung.

First Line of Dialogue or Text
The best way to keep warm is to wear a lot of light weight items!
Feature Logo

Archie
Genre
humor; teen
Characters
Archie Andrews; Fred Andrews; Mary Andrews; Smithers the butler
Synopsis
Archie battles a blizzard to get to Veronica's house, only to find that she and her family have gone to the Bahamas to escape the bad weather.
Reprints
Keywords
blizzard; snow

Hit the Books (Table of Contents: 24)

As Others See You (Table of Contents: 28)

First Line of Dialogue or Text
Where are you going on your mid-semester vacation, Mr. Weatherbee?
Feature Logo

Veronica is carrying a box from "DeCarlo Men's Wear," a reference to Dan DeCarlo.

First Line of Dialogue or Text
The district superintendent should be very impressed when he arrives to judge the energy conservation contest!
Feature Logo

Archie
Genre
teen
Characters
Archie Andrews; Jughead Jones; Hiram Lodge; Veronica Lodge
Synopsis
Archie's car is stuck in Mr. Lodge's driveway during a blizzard. Archie and Jughead find a way to get it unstuck, but it ends up on the roof of the Lodge mansion.
Reprints
Keywords
blizzard; hot air balloon

Letters are credited to Bill Yoshida but appear to be Al Hartley.

Archie and the Gang [and the Gang to the right and stacked]
Genre
teen
Characters
Archie Andrews; Reggie Mantle; Veronica Lodge; Betty Cooper
Synopsis
The girls object to what the boys call "chivalry" and what they call "sexism", so they begin to treat Archie and Reggie the way they were treating them.
Reprints

Little Archie
Genre
children
Characters
Little Archie Andrews; Little Betty Cooper; Little Veronica Lodge; Little Reggie Mantle; Little Jughead Jones; Fangs Fogarty; Professor Flutesnoot; Waldo Weatherbee [Mr. Weatherbee]; Geraldine Grundy [Miss Grundy]; Unnamed Riverdale kids
Synopsis
To get it out of their system, Mr. Weatherbee allows the kids to have a snowball fight with the boys against the girls and when he joins the boys team they get a surprise when the girls unveil their secret weapon.
Reprints

[Subscribe Today and Save At store.archiecomics.com] (Table of Contents: 42) (Expand) /

Unscramble the code to discover what Archie said when Veronica loaned him her credit card.