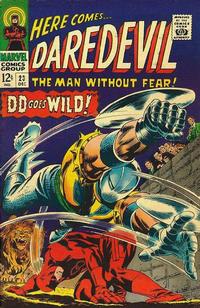 Genre
superhero
Characters
Daredevil [Matt Murdock]; GUESTS: Foggy Nelson; Karen Page; VILLAINS: Masked Marauder; Gladiator; Tri-Man; The Dancer; The Mangler; The Brain; Maggia
Synopsis
The Marauder transports DD and Gladiator back to his base in hopes of using Hornhead to help power his Tri-Man. When this plan fails, he transports them both to a movie set of the Roman Coliseum in Europe where all the Maggia heads are meeting. DD and Gladiator fight it out in the arena until a caged lion gets loose and DD ends up saving his foe's life. Gladiator refuses to fight after this and gets a job with the Maggia and DD walks away.
Reprints