In the Desert... To Die! (Table of Contents) 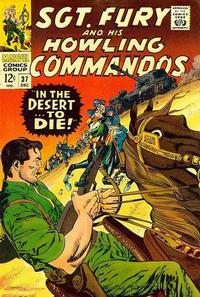 Sgt. Fury and His Howling Commandos!
Genre
war
Characters
Sergeant Nicholas "Nick" Fury; Eric Koenig; Percival "Pinky" Pinkerton; Robert "Rebel" Ralston; Gabriel "Gabe" Jones; Timothy "Dum Dum" Dugan; Isadore "Izzy" Cohen; Desert Hawk [Ben Ali Mussim] (introduction); Sheila Mussim (Ben Ali's daughter); Colonel Otto Frick (villain, introduction)
Synopsis
The Howlers parachute into Saharan North Africa to try to stop the rampage of a nomadic tribe, whose leader, the Desert Hawk, works to aid the Nazi cause. On the Howlers' arrival, they are instantly beset by nomads, but take a prisoner, who turns out to be the daughter of the Desert Hawk Ben Ali Mussim. She tells them that the Nazis hold the Hawk captive to make his men do their bidding. Fury must convince the nomads to back him, and it will take a horse-backed duel with Nazi Major Frick to prove his mettle to the nomads.
Reprints
Keywords
Africa; desert; Nazi; nomad; parachute; World War II

Circulation director Johnny Hayes is listed in the credits as "Technical advisor in charge of parachuting".