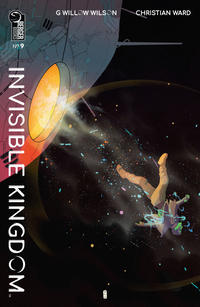 Inside front cover with credits & title page with a quarter-page illustration, and indicia.

Edge of Everything Part Four (Table of Contents: 2)

[Berger Books: The Must Have Graphic Library] (Table of Contents: 6) (Expand) /

First Line of Dialogue or Text
In 2004 we were hired to work on a video game, which we will not name, as we signed a Non-Disclosure Agreement at the time.

First Line of Dialogue or Text
The end of the world... is just the beginning.

Back cover advertisement for Tomorrow new series starting 02.26.2020 plus the barcode and Mature Readers rating.