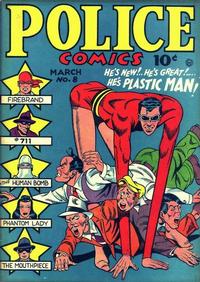 Genre
superhero
Characters
Firebrand [Rod Reilly]; "Slugger" Dunn; the Nazis (villains)
Synopsis
Rod and Slugger join the U.S. Navy Reserve and were assigned duty aboard the destroyer "Russell", and their mission was to escort a British vessel safely across the ocean.
Reprints
Keywords
The "Russell"

[The Origin of Manhunter] (Table of Contents: 6)

Manhunter's calling card, left at the end of the story, is in the shape of a shoe print (the same as his chest emblem).

[The Light of the Orient] (Table of Contents: 8)

[The Education of Butcher Bowes] (Table of Contents: 10)