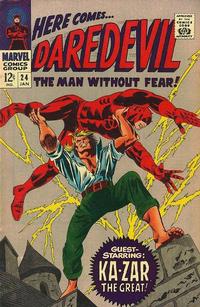 The Mystery of the Midnight Stalker! (Table of Contents: 1)

Daredevil, the Man Without Fear!
Genre
superhero
Characters
Daredevil [Matt Murdock]; Ka-Zar; Zabu; The Plunderer (villain); Foggy Nelson (cameo); Karen Page (cameo)
Synopsis
Daredevil makes his way to England where he finds that Ka-Zar is accused of being the Midnight Stalker. Daredevil realizes that The Plunderer is trying to frame his brother, and the dynamic duo track him down. In a last panel shocker, Karen opens a letter to Matt from Spider-Man stating that the Web-Slinger knows that he and Daredevil are one and the same.
Reprints

In the credits on page 1, Frank Giacoia's name is lettered in a different hand (probable Artie Simek). Since the lettering doesn't fit the available space, it possibly replaces the name Frank Ray (Giacoia's pseudonym).

The Latest Low-Down on Marvel's Light-Hearted Luminaries for Literature Lovers at Large! (Table of Contents: 2) (Expand) /