Indexed with information from Saltarella via the GCD Error Tracker and a a scan from http://digitalcomicmuseum.com.

Trapped Under Fire (Table of Contents) 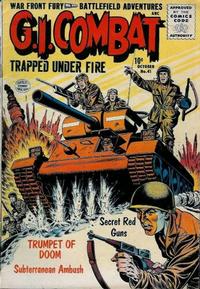 Trapped Under Fire (Table of Contents: 1)

Original title: "Hell's Heroes." Not a reprint of "Trapped Under Fire" in G.I. Combat (Quality Comics, 1952 series) #16 as we previously stated. Source of reprint corrected by Bill Melton via the GCD Error Tracker.

Trumpet of Doom (Table of Contents: 3)