Bigger and Better... (Table of Contents)

Credits from David Saunders, Clarence Doore's biographer and foremost authority on his work. 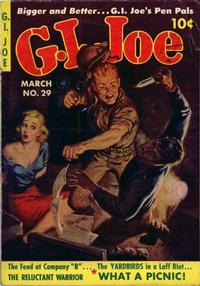 Irv Novick is credited to both pencils and ink on G.I. Joe, bur inking uncertain.

What a Picnic (Table of Contents: 3)

Not an ordinary Letters page, but a continuing story told by means of letters from a G.I. to wife at home.

First Line of Dialogue or Text
Our G.I.'s in Korea...

The Reluctant Warrior (Table of Contents: 9)

Uncertain, but some ears and hands could point to Drucker, and he is credited to G.I. Joe in the 50's.

First Line of Dialogue or Text
Say, I must be hungry!
Genre
humor; military