From the Shadows of Time...Comes Paradox! (Table of Contents) 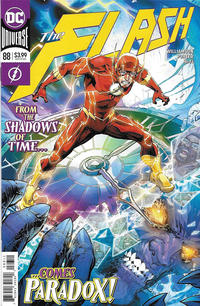 Story continues in The Flash #750.

We learn that Paradox was the mystery 25th Century prisoner shown in issue #50, and was later shown to be working with Godspeed in The Flash Annual #2. We also saw Chris (prior to becoming Paradox) and his family in background scenes during The Flash: Year One storyline in issues #70-75.

Editing
View Change History
Issue at my.comics.org
Related Scans
Series Information
Table of Contents
This issue was most recently modified by:
< Previous Issue |
If you believe any of this data to be incorrect, please let us know.
Cover thumbnails are used for identification purposes only. All rights to cover images reserved by the respective copyright holders.