An ad for Marvel heroes appearing on TV is featured on the side of a building; the ad displays the faces of Captain America, Hulk, Namor, Thor, and Iron Man. 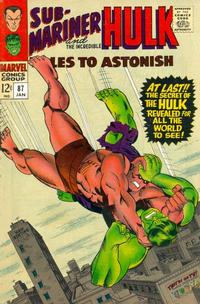 Moment of Truth! (Table of Contents: 1)

First Line of Dialogue or Text
Dorma and the unspeakable Warlord Krang have been captured by the surfacemen!
Genre
superhero
Characters
Sub-Mariner [Namor]; Dorma; Lord Vashti; Krang (villain)
Synopsis
Namor brings Krang and Dorma back to Atlantis to face judgment. To settle the question of leadership once and for all, Namor decides to battle Krang in front of his assembled subjects. So his extraordinary powers do not give him an unfair advantage, Namor battles unarmed while Krang is permitted to use any weapons that he chooses. Even armed to the teeth, Krang is unable to defeat the avenging son. Namor imprisons Krang in the deepest depths of the ocean while Dorma is restored to his favor.
Reprints
Keywords
New York City; Sanctum of Science

A number of uncredited artists are involved in this story, providing alterations, additional art and inking, starting on page 5. Frank Giacoia appears to have inked most of pages 5-6 and part of page 11. Marie Severin redrew the figure of Krang from page 6 on and Dick Ayers inked the majority of pages 7-12. Info per Nick Caputo, September 2014.

The Humanoid and the Hero! (Table of Contents: 3)

First Line of Dialogue or Text
Created by the now-dead Leader to be stronger than the Hulk, the most powerful...
Genre
superhero
Characters
Hulk [Bruce Banner]; Thunderbolt Ross; Glenn Talbot; Betty Ross; Rick Jones; Hulk-Killer Humanoid (villain); Boomerang [Fred Myers] (villain); Gorki (villain)
Synopsis
The Hulk battles the Leader's Hulk-Killer Humanoid as Ross and his cronies learn that they sent the deadly android after the jade giant for all the wrong reasons. Boomerang gets a new costume.
Reprints
Keywords
Manhattan