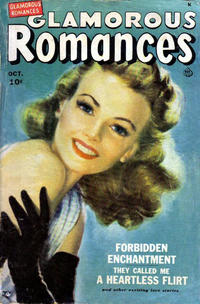 That First Time We Kissed... (Table of Contents: 1)

Genre
romance
Synopsis
A woman working in a hat shop meets a man who runs a nightclub. She gets an audition and is hired to sing there, and quickly falls in love with him. The usual romance story ups and down occur before they finally get together.
Reprints

They Called Me a Heartless Flirt (Table of Contents: 2)

Genre
romance
Characters
Drusilla Parrish; Jerry Norwood; Betty; Mr. Parrish; Tony Abbott
Synopsis
Drusilla agrees to marry Jerry, then discovers he loves Betty and is just using her to get a job on her father’s newspaper. Drusilla waits until the day of the wedding to break the engagement and gets a bad reputation as a result. Drusilla falls in love with Tony and they plan to wed. However, she learns Jerry committed suicide and she’s being blamed. Tony reveals that he’s Jerry’s half-brother and has been planning to jilt Drusilla in revenge. Drusilla still shows up at the ceremony and Tony appears—he found a letter clearing Drusilla, and has decided he loves Drusilla and will marry her.
Reprints

Her Way to Catch Him! (Table of Contents: 3)

Genre
romance
Synopsis
A woman working in an office is known as a "man snatcher." One of her co-workers is glad her boyfriend doesn't work there, but he does end up meeting her at an office party. Of course, the man snatcher steals him away. Later, the co-worker gets a promotion to being a personal secretary to a man who eventually asks her out, but she turns him down. When the man snatcher tries to steal him away, the co-worker realizes she loves her new boss, and then discovers he loves her, too.

Glamorizing Yourself (Table of Contents: 4)

Instructions on how to apply makeup and do one's hair to be more glamorous.

Genre
romance
Synopsis
A debutante is dating a man her uncle wouldn't approve of. One day she meets a famous artist who wants to paint her portrait, and she agrees. Her boyfriend doesn't like the fact that she's posing for an artist. After breaking up with her jealous boyfriend, she then learns the artist was hired by her uncle (in an attempt to break up her relationship), so she isn't interested in him, now... so she ends up going back to the first man, who is soon arrested for a variety of crimes. She then learns that the artist really does love her, and she loves him.

After That Kiss (Table of Contents: 6)

Sort (12 stanza) poem.
The "A.H." initials are all that's provided for the author's name.