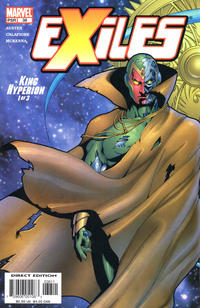 Genre
superhero
Characters
Weapon X [Hyperion; Spider; Gambit; Ms. Marvel; Storm (death); Colossus; Vision (death)]; Magneto; Quicksilver; Kitty Pryde; Bruce Banner (cameo); Forge (cameo); Rogue (cameo); Iceman (cameo); Mystique (cameo)
Synopsis
Storm is killed during a Weapon X mission and when they arrive at their next reality, Hyperion has been sent by the Timebroker to join the team. Hyperion quickly asserts his authority over Weapon X and decides that the team should ignore the commands of the Tallus and simply take over the world they have found themselves on in order to rule it. The only problem is that the world already has a ruler--Magneto.
Reprints

The Exiles do not appear in this story.